Warframe Bans Players For No Reason

These excerpts were one of many pulled from the Steam forums and Reddit communities regarding Digital Extremes games "Warframe" and their practices of banning players accounts accusing them of "cheating" with no evidence. Read on as the author explains his plight of being autobanned for no reason. Google searches reveal similar stories showing that he is not alone. If you have any sort of playing time or financial stake invested in this game: spend your remaining moments wisely as you'll hear that they can pull the digital carpet up from underneath you leaving you with no responses or channels to reach some sort of restitution.

Hey I am pretty new to warframe forgive any misused terminology or misunderstandings while I do my best to explain my issue. I started playing warframe about two weeks ago because with my schooling slowing down I have some time to game for the summer. My friend has been playing WF for a few years now and had setup a nice dojo and invited me to join it after I started playing. I put about $80 into the game to start off with and 100 hours roughly. (btw I love the game a lot)

So the problem begins when I am on my ship and I go to use my foundry and I get an error message saying 'Authentication failed', this keeps happening so I log out and go to log back in and I receive an error saying I am banned until 2035. Now originally I was freaked right out, and opened a ticket IMMEDIATELY asking what the heck was happening here. I have been doing some research in this time and I have found out some reasons for an automatic ban to trigger.

I am able to check my account management page on warframes website and it says I still have 20 platinum left. So I do not have an issue with a chargeback (bad trade). I have only purchased $80 worth of plat and it was from DE directly. I don't have any strange programs on my pc running. I have never talked in chat to anyone in game (not being toxic). I only ever played with my fellow clan members and we all spoke via voice chat.

The only thing I could find information about the autoban triggering may have been because my friend and clan leader gave me 200 plat. That plat was earned in game, and again he is not banned nor does he have a negative balance of trade. His plat was fine and no bad trades could have lead up to this. One of us would have negative plat or both would be banned I am sure.

Now I just don't know what to do because support has had my ticket open for almost two weeks now, I have reached out to @sj_sinclair a while ago on twitter, and he did reply saying he would check it out. I get that they must be very busy, especially so with the stalker stuff going on. I just don't know how much longer my patience can hold out. I just picked up monster hunter world to alleviate my concerns over it all.

Should I open a second ticket? I know they state DO NOT do this but something is clearly being overlooked or they are actually swamped with problems and who knows when I will get my account back.... The one I just started playing and getting proficient with. (Just did my first sortie before the ban) 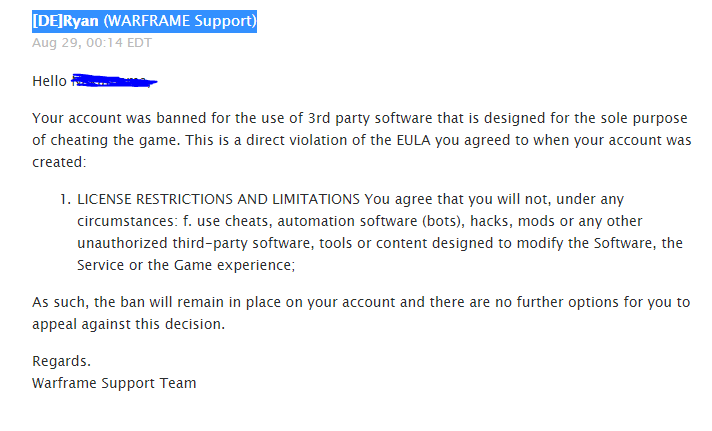 Dunno what to say other than I didn't use any program. I don't do that sort of shit, if you check my steam profile it's clean, many hours across many games. Why start playing warframe to cheat? Why start screwing around now iunno doesn't make sense.

Feels bad, thanks for the support though guys.

A pretty sad state of affairs to leave a player who championed this game to many people. This player is so distressed that posts from the same account name can be found over on Steam

The Steam Post
DE banned me for nothing...'Cheating'.
Go look at my steam profile. Why would I start cheating now in wf, look how many hours I have in CSGO clean record to. My bnet, origin, uplay every single account I have. I have never been banned in any game ever for anything. I spent 100 hours on this game and $80. Goofy DE... Good thing I am 30 min from their head office, I am going to take a dump on someones car later.

Thread I made following my support ticket.

I am not trying to appeal anything here, I don't want anything other than others to know how DE screwed a paying customer over and how I responded.

Steam/valve take their metrics, to think they don't keep tabs on shady stuff is stoopid. They don't want companies giving them a bad rep with trash services. If enough crap like this sticks to DE it won't take all too many years before they are going to be down one massive distribution platform. Yea I am just one customer, but there are others who have fallen into similar scenarios with trash support, not just from DE either. Just takes enough people to warrant attention.

I unpleasant have to say, he isn't the only one. There are too many similar stories popping up all over the boards on Gamefaqs and /v/ for this to simply go away now. I felt that it needed to be documented and archived before it is exposed on a bigger scale.

If you have any similar stories, I invite you to share them in the comments. If you story is so ludicrous that you feel it deserves it's own article you will find the 'Submit to Archive' button at the top of the page. This will put you into direct contact with me.